Over at the Oregon Humanities web site, Dave Weich describes what it’s been like asking friends and strangers to imagine a future where people live for hundreds of years.

How would extending our lives indefinitely change us, Weiner wants to know, as individuals, as communities, as nations, and as a planet?

For weeks now, I’ve been interviewing friends, and friends of friends, and colleagues, and strangers at parties. Virtually everyone over thirty reflexively shrinks from the idea. “I get tired just thinking about it,” they’ll say. But soon a strange thing happens. They become animated. They ask someone nearby (or someone nearby approaches unsolicited, seeing arms waving or hearing a raised voice), and in this way the conversation continues.

Consider: Since 1900, the human life span has increased from 47 to 80 in developed countries. Better infant mortality rates are only one factor. Every day, our life expectancies increase by five hours, Weiner notes. (Existential punch cards: Live five days, get one free!)

Simply put, our lives continue to get longer and, together, we celebrate the news. These incremental gains we accept as our due. But living twice as long, or longer? We can’t wrap our heads around it. Somewhere between five years and five hundred, the ethics change.

Dave interviews authors for the web series ReadRollShow. His company created this web site as one of several spaces for conversation about long life.

*That’s the mission of Oregon Humanities: to connect Oregonians to ideas that change lives and transform communities. The web site explains:

Oregon Humanities’ programs and publications provide a forum for individuals and communities to raise questions, challenge assumptions, listen to others, and think critically about the issues that directly affect their lives and those of the people around them. Our programs are designed to inspire insights, or what we call “O. Hm.” moments.

“The earth, I’m guessing, would not become overpopulated because by then we would have technology to live under water maybe, possibly to live in the air.”

Paula Span, the author of When the Time Comes: Families With Aging Parents Share Their Struggles and Solutions and a colleague of Jonathan Weiner’s at the Columbia University Journalism School, responds to Long for This World on the web site of the New York Times.

My theory is that the more intensely involved we are with caring for the very old and sick, the less appealing the notion of ever-longer lifespans becomes.

I can practically hear legions of New Old Age readers — hip-deep in elder tasks, in decisions and tussles and exhausting responsibilities — chorusing, “More years of this? Please, no.” A number of older readers have expressed similar sentiments here themselves.

But what if longevity didn’t involve an extended period of managing chronic illnesses and coping with frailty and disability, as so often happens now?

Win a signed first edition of Long for This World!

UPDATE: Congratulations to Julia from Hagerstown, Cynthia from Deland, and Richard from Indianapolis, who’ve each won a signed first edition of Long for This World! 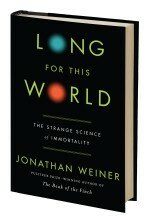 Enter for a chance to win a signed first edition of Long for This World.

To celebrate today’s publication of Jonathan Weiner’s “brilliant and improbably funny look inside the mind-bending science of immortality” (The Village Voice), we’re giving away three signed first editions of the book.

What are you waiting for? You’re not going to live forever! Or maybe you will, but in any case surely you’d like a bright, shiny, free signed copy of the book that Kirkus (in a starred review) calls “a gripping account of the science of aging.” Enter now…and may the raffle be with you!

Something shifts at about 50, I think—you stop ramping up and begin to see the other side. At least that is my experience and that of many of my friends who are over 50. (Not that I am way over 50!) The thought of going on for 500 years sounds exhausting. A lot of my paintings these days are about straddling the line between this reality and the spirit world, if you could call it a line. This one is called Equinox. 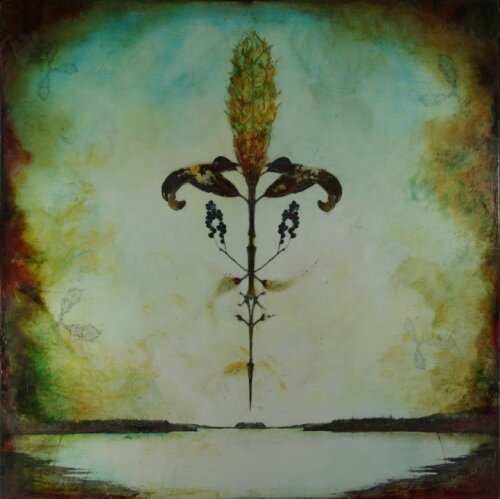 [Editor's note: See more of Molly's work at her official site. And read more about her technique ("encaustic painting").]

As long as I can sustain belief

Q. If you could stay healthy (“biologically young, chronologically old”), how long would you want to live?

As long as I can sustain belief.

It depends a lot on how long the people that I care about could live. Would I want to watch other people die? And how flexible the definitions of identity, relationship, and self are. Already the myriad of experiences at my fingertips have made me question my gender, my roles, my nationality, my everything.

Life is hard when we have to navigate competing narratives—as an individual, and as a society.

And resources—would I have resources to sustain myself? Would my quality of life be tremendously different? Would I choose to own less and do more? Would I hoard, or would I give?

Would I still taste pomelos? Would coffee still wake me up? Would I still have an orgasm? Would there be anywhere new to see?

Would everyone choose heroin? Or would we stop smoking?

There would be so much to foster in this modern culture…so much minutia—how would we handle all our memories?

Could we plug ourselves into a hard drive and download a bit? Would we have to sleep more? Or sounder?

Would communication become less linear? Would everyone segue between thoughts, concepts, and metaphors with fluidity? Or would we have inadvertently created one language, with less unknowns—and less romance—less heritage?

How would our culture(s) handle so much more? Would we have more specialist knowledge? … Eccentrics with experiences that were so myriad that they prohibited each from creating sound relationships with others? Or would there be a greater unity buttressed by the overlapping experiences of so many people?

Would people choose to die more? And would that be acceptable?

Would they find lack of change increasingly oppressive? Would they take greater risks?

Or would the idea of losing 500 years of life in a single day begin to outweigh glory and fame? Would we ALWAYS choose safe sex?

Would we revere age and wisdom more? Or continue to celebrate youth and shapeliness?

In a world where resources have never been limitless, would society choose which people were worth most and allow them greater years? And could that ever be anything other than arbitrary and without nuance?

Q. If you knew that you had an extra 50 years in front of you, how might you change your life?

I would live it exactly as I do now. And I would choose to live as long as I can—because daily we have the opportunity to choose life, or not. And daily we struggle to accept change and trudge forward.

Q. Would you wish a 500-year-life on your kids if you couldn’t have one, too?

Parents have to make peace with that from the beginning. The day you begin to love, loss looms large.

I want to grow old

“I work with the elderly. I work in a skilled nursing facility, and I see a lot of people at end of life. And I think unless you’re exposed to that there’s this perception that it’s this horrible, horrific thing. Nobody wants to live out their years in a nursing home. Nobody wants to grow old. They kind of ignore it and pretend it’s not going to happen to them. They block it out. It’s not…

“It’s kind of a natural progression of things. You think these people have a poor quality of life, and granted some do, but, you know, it’s all a part of the cycle. A lot of these people have so much wisdom and so much skill to give to our generation. And they’re happy and they’re comfortable and they’re at peace with where they are right now.

Quality of intellectual and emotional life

Who’s to say that advances in gerontology would inspire people to take better care of themselves, and thus reach a more enjoyable old age? We’ve already done amazing things to prolong life. And yet, are we really any better to ourselves? I look at supermarket shelves, rates of smoking & alcoholism, the never-ending race we run as capitalists…. and I think, not so much.

I’m just as concerned about how science will preserve our brains as our bodies. For the sake of argument, I think the edge can be pushed pretty far. Assuming quality of intellectual and emotional life can follow the same curve as physical life, I see no reason why we couldn’t hang around on the planet for 100, 200 years, maybe more. I’d like to think humanity might get a little smarter about its politics if this were the case.