On September 18th, C-Span2′s BookTV filmed Jonathan Weiner as he spoke about his new book at Politics and Prose Bookstore in Washington, D.C. and book critique that were made after. 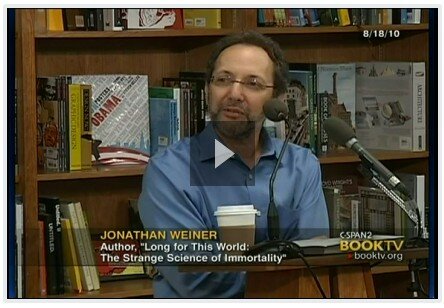 Today at The New Republic, Jessica Loudis reviews Long for This World.

“In his lively and immensely interesting book,” she writes, “Jonathan Weiner looks into this strange field and asks what leads someone to defy collective wisdom—worse, collective knowledge—and devote their life to fighting life’s end.”

Weiner is less concerned with whether immortality is possible—he doubts that it is—than with whether it is desirable. This, too, is an ancient question. It has been pondered in philosophy for centuries, and it is enjoying a certain vogue in American popular culture—consider the recent spate of vampire movies and shows. But as Weiner suggests, it has become particularly relevant as global demographics adjust to contemporary medicine.

The science of aging is at the center of several urgent if quiet medical debates, and Weiner skillfully fleshes out its more radical history with equal attention to science and culture, taking aim at readers from both camps.

Read the complete review at TNR.com.

Assuming that you remained healthy—imagine the vitality of a 30-year-old—would you want to live for 200, 500, or 1,000 years? Sloane Crosley, bestselling author of I Was Told There’d Be Cake and How Did You Get This Number, isn’t so sure. (Video courtesy of ReadRollShow.)

How Will Nature Adapt?

Nature seems to find new problems for us continually. I raise the following question:

If we cure the effects of aging, we will basically be prolonging the state of our bodies at one point in our life cycle. Wouldn’t that clearly open a huge niche for bacteria, viruses, and parasites that are currently held in check by the aging process or whose population is controlled in part by the deaths of older generations?

Long for This World, review and podcast

Weiner brings his insightful book to a close with this thought: “The trouble with immortality is endless. The thought of it brings us into contact with problems of time itself—with shapeless problems we have never grasped and may never put into words. Our ability to exist in time may require our being mortal, although we can’t understand that any more than the fish can understand water. What we call the stream of consciousness may depend upon mortality in ways that we can hardly glimpse.”

Even if writers become immortal, books must end, and it is by reaching the end that the reader can sit back and find meaning in the journey. Long for This World is a great trip.

The Kingdom Where Everybody Lived Forever

What might the world look like if scientists succeed in finding a cure for aging? Author Aimee Bender imagined such a scenario ten years ago, through the eyes of the father in her first novel, An Invisible Sign of My Own.

“So,” begins Bender’s story. “There was this kingdom once where everybody lived forever. They’d discovered the secret of eternal life, and because of that, there were no cemeteries, no hospitals, no funeral parlors, no books in the bookstore about death and grieving. Instead, the bookstore was full of pamphlets about how to be a righteous citizen without fear of an afterlife.”

Here Bender reads the prologue in its entirety, describing a kingdom with a radical approach to the overpopulation that comes from no one dying. (Video courtesy of ReadRollShow.)

Illness, Wellness, and the People You Love

Visit the breathe books Facebook page between July 26th and 30th as Jenn and breathe’s proprietress Susan Weis facilitate a discussion of Long for This World. 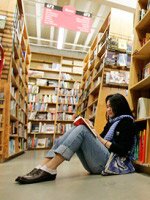 Head to the Powell’s Books Facebook page on Tuesday, July 6th at 8pm Eastern (5pm Pacific). Weiner will be on-hand to answer questions, chat with readers, and ponder the science of immortality.